Below are the answers to the engine analysis Scenarios

Author: Jacob Hoffner
​Rocket: Hi-Flier XL
Below are the analysis answers to the following information on model rocket engines:

​
Newton’s third law of motion states: “For every action, there is an equal and opposite reaction”. At one end of the rocket, there is a large amount of thrust released from the heat and chemical reaction in the engine. The force that pushes the gas backwards from the rocket, according to Newton’s Third Law, is balanced by an equal and opposite force acting in the forward direction. In this case, the rocket is propelled by the thrust produced in the upward direction as the forces of the engine push in the downward direction.

There are factors to consider when analyzing which model rocket engine to use. Each letter for each engine specifies a different total impulse released by the engine, thrust x time. The number right next to the letter indicates the average thrust that will be released from the rocket engine. The last number, to the right of the hyphen, indicates the time delay between the shutting off of the engine and the reverse thrust that deploys the streamer or parachute within the rocket, ejecting the nose cone of the rocket.

The Labeling of an Impulse Curve:

Below is a picture of an impulse curve that accurately represents the burning stages of a model rocket engine. I have labeled all of the different stages that occur during this burn. 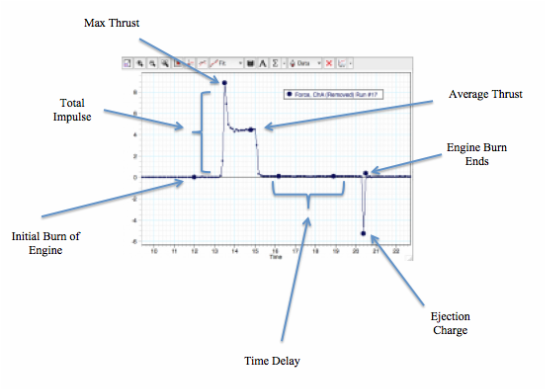 Below, I classified three different engines based on an Estes engine chart and three provided impulse curves:

Caroline’s Eggscaliber rocket is traveling at an 20 Ns impulse at an average of 12 Newtons of thrust. Her nosecone will eject instantaneously after the engine has burned. Because here rocket is an Eggscaliber rocket, that egg-nosecone may eject and slam right back into the rocket due to the continuous upward motion of the rocket. The nosecone could also rip off due to the force applied. Either way, the rocket would most-likely take damage. A better engine would be one that has a longer chute-ejection delay. A D12-5 would give a better delay for the parachute. A C11-5 would not give as much of an impulse, which may spare the rocket some damage if the nosecone deploys and comes in contact with the rocket fuselage.

My Hi-Flier XL rocket recommends using C11-3, D12-5, D15-7, E9-6, or E9-8 engines. If I were to use the C11-3 engine, my rocket would go a considerable distance in the air, but due to its size it would not go too far. The 11 Newtons of thrust is considerable, however, and the chute delay is satisfactory for this type of engine. The E9-6 is much greater than the C11-3, as this E-engine has 20 Ns more of an impulse than the C-engine. The E9-6 also has a slightly lower average thrust, 9 Newtons, but due to the height that this engine would propel my rocket, I feel this chute time-delay of 6 seconds is great. I will use the D12-5 and the E9-8, because these rocket engines both has a considerable time delay compared to their impulse, which will allow my rocket to get closer to the ground before deploying its chute. Plus, these engines have a big impulse, allowing my rocket to reach a considerable height.