The purpose of this lab is to investigate centripetal force (or radial force) at the bottom of a vertical circle.

In order to measure radial force, we used DataStudio. We measured the following variables: Radius, Mass, Velocity, and Force. We decided to change the amount of mass per Run and measured this mass on an electric balance. We attempted to reduce error in the lab by increasing the mass per run. A photo gate on a stand was used to capture the velocity and force of the moving mass, due to the mass's flag length. The same radius (or rod) was used throughout the entire lab, so this number remained constant. The Velocities and Forces of the lab were projected onto a computer into graphs. We allowed the pendulum to swing through the motion sensor until the computer accumulated enough data. 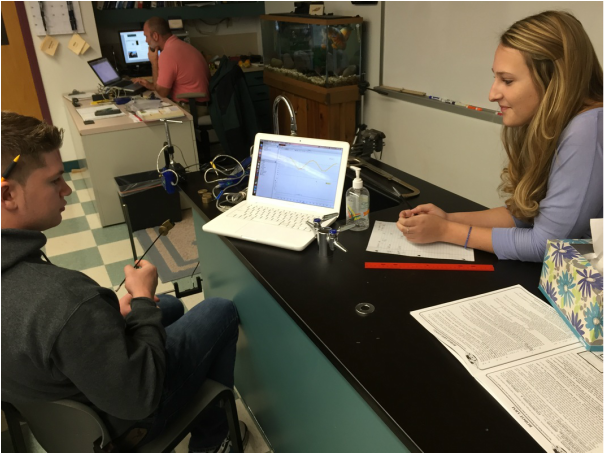 Below is the acquired data found per Run. Mass was converted to kilograms in order to contain the right units in our calculations. The Measured Radial Forces DataStudio found is placed alongside the Calculated Radial Forces we found using the Radial Force Formula stated above in the Theory section.

The Average Percent Difference was: 52.9%
The Graphs below indicate the Velocity and Measured Radial Force for each Run with a different Mass. As the Force graph displays sine curves due to the constant circular motion of the pendulum bob, the Velocity graph displays a constant speed as a linear line. The values in the Data Table above were taken from selected points on these lines.
* Lightbox is Applied to Graphs ~ Will Magnify when Clicked*

There were some factors that obviously affected the pendulum bob as it traveled its circular path. While Velocity attempts to pull the bob in a linear path, Tension pulls the bob towards the center of the circle, counteracting the Weight trying to pull the bob out of its centripetal force. To go further, if Weight is broken down, you could say that the Mass of the object and Gravity directly affect the outward vertical force on the bob. Some factors may have lead to the difference between the measured and calculated radial forces. Outside forces could include air resistance, which could slightly affect the bob's Velocity. Furthermore, the radial forces of the different masses measured by the photo gate might have been electronically read slightly inaccurately, whereas the Calculated Radial Force provides fixed, theoretical answers. DataStudio could have slightly rounded its data in order to satisfy the points of data I've selected. I have observed that the biggest error in this lab, however, was due to a zeroing mistake on the pendulum device; this mistake led to extreme percent differences. If the mistake was avoided, we could see what other error(s) affected the lab. A fluctuation in where the pendulum bob is released could have rendered the bob's velocity from staying constant. In order to reduce error in the lab, the Flag Length could be measured to a smaller decimal place for when it travels in front of the photo gate. Plus, we could perfect where we drop the pendulum bob from to start its swing in order to improve the intended initial Velocity. Overall, we have proved the theory on radial force and investigated circular motion.