The Purpose of this lab is to verify the Law of Conservation of Energy by investigating the compression of a spring.

In order to find the elastic coefficient in each of our springs, we each added weight to a pulley system to indicate how much mass each of our springs could take. This was done by pushing a wheeled vehicle against the spring by applying masses suspended on a pulley to the end of the vehicle pushing against the spring. The vehicle pushes the spring into a screwed-in stopper; the displacement of the spring's deformation determines the x-value, or position, in meters. This distance is measured using the ruler attached to the side of the track the wheeled vehicle sits on. The Force of the spring is determined by the mass exerted on the spring multiplied by gravity, g. This data could now be put into a graphical form in order to find the spring constant by observing the slope of the graph's line.
After finding the spring constant, we launched the wheeled vehicle with the spring to see how fast the vehicle's velocity is when the spring is at different compressions. First, we leveled the plane the vehicle was launched on. Second, the vehicle was supplied with different masses and a "picket fence" to test velocity. A rotary motion sensor was placed above the vehicle to measure its velocity. The spring was compressed behind the vehicle and held in place by a pin behind two screwed-in stoppers. The pin was released by a string to begin the vehicle launch.
We launched the vehicle six times in order to get a set of data for velocity. Through these six runs, we varied the amount of mass the wheeled vehicle held, along with different spring compressions. Using the derived velocity equation summarized in the Theory section, we will calculate velocity in order to compare it with the measured velocities found by launching the wheeled vehicle. This comparison will be done using percent difference. The data collected in this lab will be used to verify the Law of Conservation of Mass due to the compression of the spring.

Below is the chart displaying the data that was used to find our spring constant:

The graph below resembles the data in the chart above. The slope of the line below is the spring constant, k. Therefore, k=127.4 N/m. 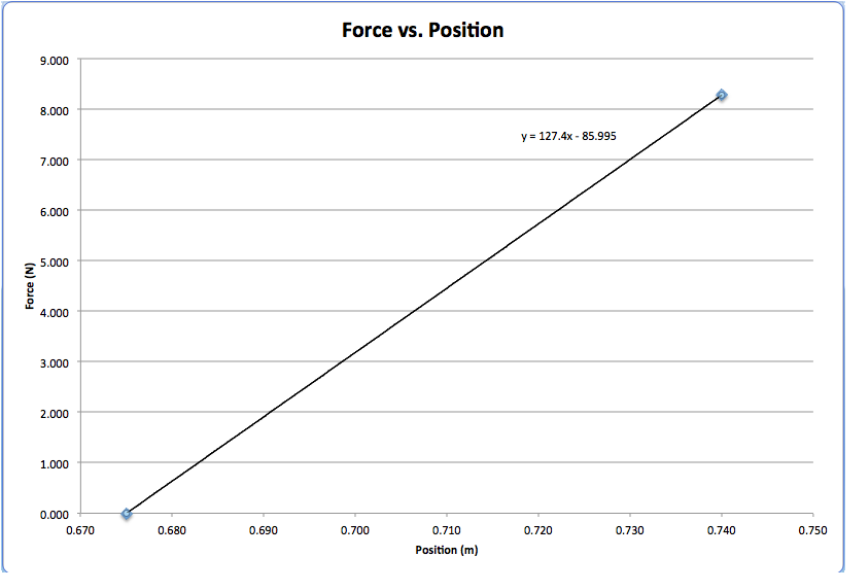