All Labs From Jake Hoffner Are presented below

To determine the Moment of Inertia of an object.

eIn order to begin this lab, we first had to pick the type of object we wanted find its Moment of Inertia. I chose the rod. Three masses were placed on the rod; two on one side of the center of mass, and one on the other side. The masses were balanced evenly on each side of the rod. The rod and masses were placed on the side for now. A C-clamp was then anchored to a table-top, and a long pole was attached vertically. A pulley sensor (for lack of better words) was clamped on the top of the pole. This sensor measures the angular acceleration by plugging the data it finds into an Angular Velocity vs.  Time graph on DataStudio.
The rod I had placed to the side is now screwed into the top of the pulley sensor. On the side of the pulley sensor, a separate pulley is anchored on in the opposite orientation. A string is looped around the pulley sensor's "pulley" and then fed over the pulley just attached. At the end of the string, a mass is attached.
We are to measure the angular acceleration of the rod and masses. In order to do so, the mass is released, which pulls the string wrapped around the pulley sensor. The angular acceleration of the rod and masses attached to that pulley sensor is measured through the sensor into DataStudio in the Angular Velocity vs. Time graph.
This measured angular acceleration is later used in the measured Moment of Inertia equation in order to compare with the calculated Moment of Inertia found. The measured Moment of Inertia will then be found using the derived equation, and it will be compared with the calculated Moment of Inertia found with another derived equation. Percent Difference will be calculated to see how close the measured and calculated quantities came out to be. 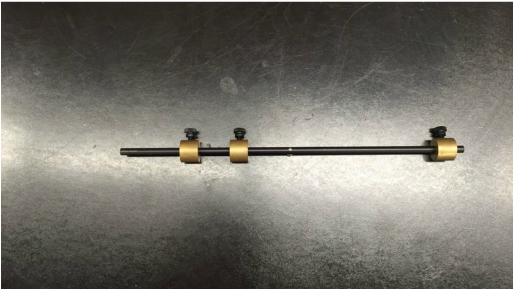 Below is the Angular Velocity vs. Time graph, which indicates the angular acceleration due to the slope of the line. 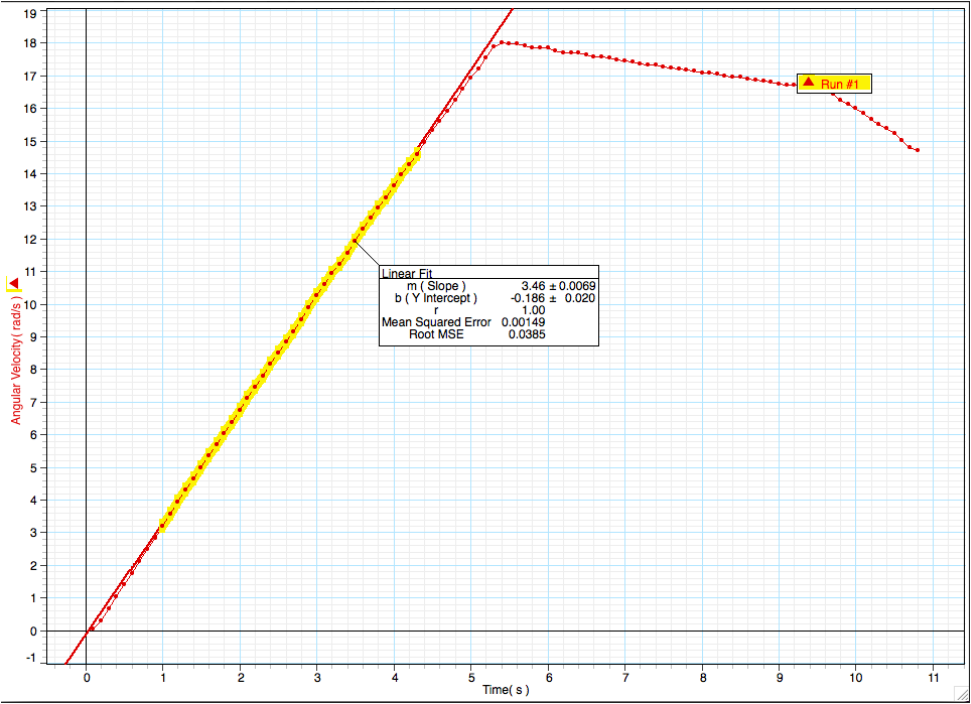 The Hanging Mass that caused the overall angular acceleration was 0.055 kg.

​R1, R2, and R3 represent the distance the point masses were from the center of the rod, or the rod's center of mass.

Due to high accuracy between the calculated and measured Moments of Inertia, these values were rounded to five significant figures.

This lab proved to be very successful. By the end of the lab, the theory was proven. Equations were derived for Moment of Inertia for the measured and calculated values. By gathering careful measurements and solving various variables, we were able to solve for the Moment of Inertia of a rod and point masses. Between the calculated and measured percent differences, there was only about a 0.04% difference; the two values came out very accurately. Because of this very small difference, I had to expand the values from three to five significant figures in order to contrast them. Errors in this lab could in Parallax Error, as measuring the radii of objects can be slightly off when trying to align the measuring tool with an objects center of mass. The string that was wound, causing the angular acceleration of the rod and point masses, could have been bunched up, creating a larger radius of the overall pulley and ultimate error in the lab. There could have been minuscule friction and air resistance, causing a slight error in measurements. Overall, this lab was extremely successful, and extremely accurate.