​Forces will be identified and studied using Atwood's Device. Acceleration will be predicted by summing the forces, F=ma, of two different objects and deriving an equation in order to investigate the correlation between the predicted acceleration and the measured acceleration using Newton's 2nd Law of Motion.

George Atwood was an English mathematician who was born in 1745 and was a very popular lecturer at Cambridge through the 1770's. He is best known for a work, A Treatise on the Rectilinear Motion and Rotation of Bodies, which is a textbook describing the mechanics of Newton's laws through impact and simple harmonic motion. The book describes Atwood's Device, which was created in order to demonstrate the laws of uniformly accelerated motion due to gravity. The device first appeared in France in 1780, and since then copies had been sent to Spain, where it latter was introduced to the rest of the world. Atwood's Device is used to present Newton's Second Law of Motion through summing the forces, F=ma.
We already know that T=T, since Tension is equal on both Object 1 and Object 2. Because of this, using the Transitive Property, the two expressions T equals can now be set equal to each other. 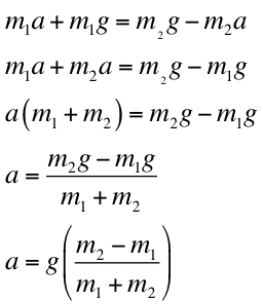 Now that both of Tension's solutions are set equal to each other, we can now derive for acceleration, a. In theory, we discover that acceleration equals: g[(m2-m1)/(m1-m2)].

​Below are the graphs used to find acceleration. The Velocity vs. Time graph (center graph) is presented below so the slope can be used to find acceleration. The graph to the left indicates the slope of Run 1 as an example, which yields 0.402 m/s/s. The graph to the left indicates all three slopes of all Runs 1-3.
Below are the masses that were used in each run above, as well as the measured and calculated accelerations and percent difference. Each row indicates the results of one run above.

The main purpose of this lab was to discover if the equation derived to find acceleration yielded an answer close to the acceleration measured. The predicted and measured accelerations compare quite closely to one another; considering that the average percent difference was 8.95%, the overall error in acceleration was not substantial. Parallax error in release the Objects in a straight line would have been the biggest error, however it would have been picayune, since acceleration was measured by the photo-gate, which eliminates most human error. However, human error could have been a major contributor to the differences in the objects' accelerations. The release of the masses could have resulted in string wobble, especially when the masses hit the table, which could have yielded a line that was not perfectly straight on the graph, resulting in slight acceleration inaccuracy. All in all, the predicted accelerations proved quite reliable to the measured accelerations. In order to reduce error, we increased the difference in masses of the two Objects in each run. However, this method resulted in an increase in error. The antipode in the order or runs, however, would have yielded a reduction in error (in other words, starting from Run 3 to Run 1 reduced error). Overall, we have learned that having a smaller difference in mass between the two Objects yields a lower percent difference, thus a reduction in error. Thence, we have discovered that our theory is proven correct; due to the low yield in percent difference, it can be stated that the equation derived for acceleration can be used to accurately calculate acceleration in relation to Newton's 2nd Law of Motion.